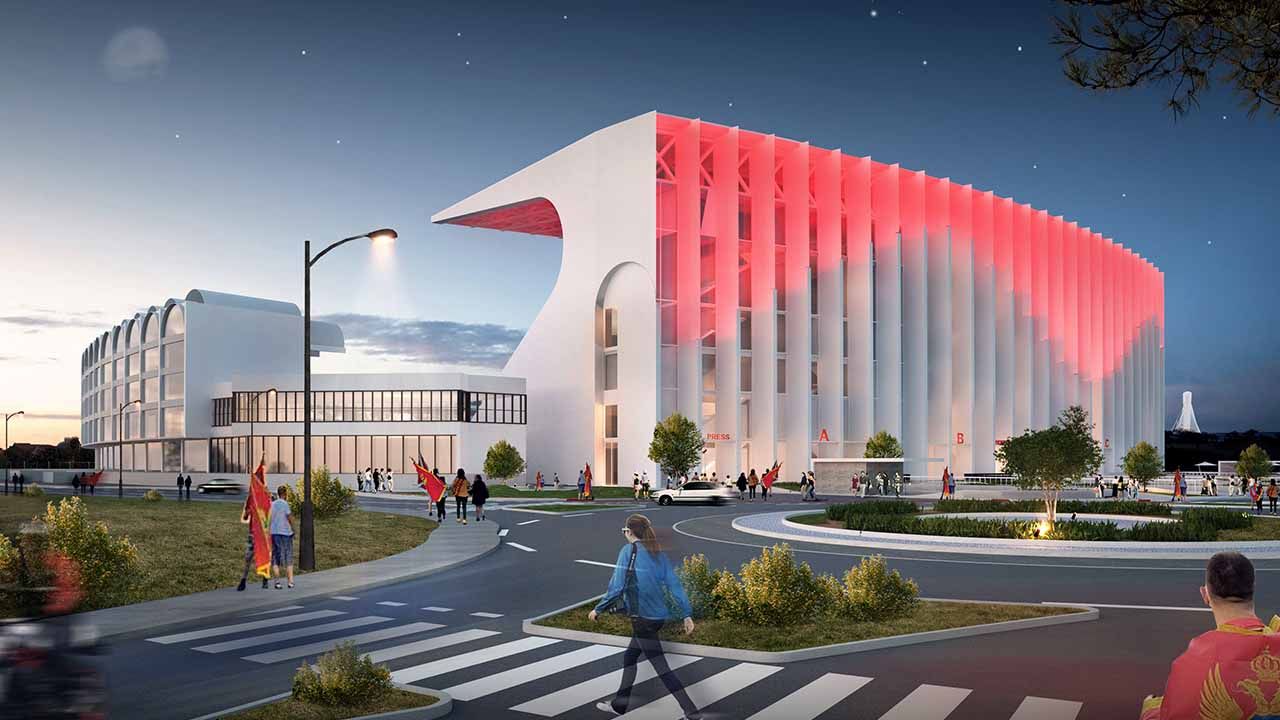 EAST TRIBUNE OF THE CITY STADIUM IN PODOGORICA

The conceptual design of the east tribune of the city stadium in Podgorica is entirely based on FIFA and UEFA standards for this typology of facilities. Designing such a tribune is challenging and specific from several aspects. Namely, the biggest challenge is the functional and visual fitting of the new structure of the eastern grandstand into the already existing grandstands and terrain, as well as the solution of the infrastructure.

The existing stadium has identical north and south tribune, while the west is different.

The initial idea was to create a tribune that would fit into the existing ambience, but at the same time give a new and modern identity to the stadium, in the spirit of the time in which it was created.

Since the dominant directions of approach to the tribune in question are from the direction of the north and south, we tried to create one visual whole through the contact zones. The dominant visual element that stands out on the south and north stands are the arches (vaults) that cover the stands. By positioning the openings on the sides of the newly designed (eastern) grandstand, which approximately transfer the size of the arches from the north and south grandstands, the visitor is introduced to a new visual experience but with the already familiar element he encounters when passing the north and south grandstands.

Wave as a motif

On the entrance façade of the tribune, a wave is visually formed by the position of the vertical plane trees, ie the cuts in their upper part. The beginning of the wave is the arch on the side facade. The wave continues along the entire facade, giving it dynamics and flows again into the arch on the other side facade. The choice of elements has several meanings.

The primarily transformed element is taken over from the adjacent stands into a movement that heightens the euphoria of the spectators, giving the object the identity of a sports arena.The inspiration also came from the famous fan wave that is performed around the world by the movements of the fans in the stands.

An ambiguous view of stadium architecture

With this treatment of the facade, the stadium was given the possibility of a different visual perception of the facade, which will, depending on the current purpose of the stadium, send different messages to the observer, both on the micro and macro plan. All this was achieved by positioning the waves in the upper part of the facade, which was obtained by simply cutting vertical reinforced concrete columns on the façade. The idea is that on the day (evening) of the match of the Montenegrin national team, the top of the stand (or wave) is illuminated in red, on the evening of the match of FC Buducnost Podgorica the top of the stand and the roof can be illuminated in light blue, while for a concert or other purpose can be illuminated in any color according to the theme.

Considering that the eastern tribune, due to the project task of the required capacities, is some 10 meters higher than the other tribunes, it can be seen from several important points in the city. For example, an observer from main streets or from the Millennium Bridge will see the lower side of the roof of the east stand painted in one of the colors, depending on who is playing at the stadium at that moment. With such a simple solution, easy recognition is achieved when the stadium is used for club and representative purposes. During the day, and the days when the match is not played, the visual identity of the building gives shading of parts of the facade columns, with materialization neutral enough to support the formulas and atmosphere of the business / shopping center.

The capacity of the stadium is 6009 seats, of which: